Opening reception: Wednesday, May 24 from 6-8pm

Leitz & Fuchs: Escapes Through the Chimney, a performance by András Böröcz: Saturday, June 4th at 3pm

Pavel Zoubok Gallery is proud to present Profound Objects, an exhibition of new works by András Böröcz that examines the context and symbolism of everyday objects. During the run of the exhibition, Böröcz will present Leitz & Fuchs Escape Through the Chimney, a new performance that utilizes his drawn and sculpted works as theatrical props, satirizing material culture, his own studio practice and the fraught cycle of creation and consumption.

Whether inspired by past performances or used to generate new choreography, objects and the actions they prescribe have been Böröcz’s leitmotif for nearly forty years. One such form that embodies perpetual motion is Charger, 2016, an economical assemblage conjoining a wooden rocking horse with a disused darkroom enlarger and a horsehair fly-whisk. Acoustic Studies for Escape Through the Chimney, an accompanying suite of drawings stretched tightly over various pots, plungers and aluminum lampshades, diagram Charger’s creation and its potential uses. During the performance, these drawings are drummed as the artist rocks back and forth on the original assemblage, aping creative multitasking and the idiosyncratic tempo of studio labor. In the accompanying catalog essay, art historian Agnes Berecz writes:

Playing a hybrid role that fuses parts of the homo faber, the homo ludens and the village idiot, Böröcz’s performances are satires of studio work. Not unlike Bruce Nauman’s late 1960s films and photographs, Böröcz’s work employs the performative as a rescue operation to simulate and parody processes of object making and artistic labor.

Recurring in various media, Böröcz’s found materials are whimsical and idiosyncratic, with pencils often making up the body of his art. The current series of works move his signature medium away from figuration into the natural realm. Switch and Douser, both 2015, extend fig and paper mulberry tree limbs found near his studio with a tromp-l’oeil accretion of carved pencils. These organic yet highly manufactured works encapsulate the seriousness and generosity of Böröcz’s generally absurd endeavors, suggesting an imaginative impulse rooted in natural processes of growth and decay.

Born in Budapest, Hungary, András Böröcz has exhibited and performed extensively in Europe and the U.S. since 1983, most notably at the Museum of Fine Arts, Budapest, HU; The Bronx Museum of the Arts, New York; the Ernst Muzeum, Budapest, HU; the Itami Museum, Japan and the Hungarian Cultural Center, New York, NY. His work is in numerous public collections including the Boston Public Library, the Jewish Museum in New York, the Ludwig Museum of Contemporary Art in Budapest, the Museum of Fine Arts in Budapest and Yale University in Connecticut. This is his second solo exhibition with Pavel Zoubok Gallery. 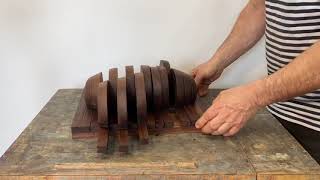 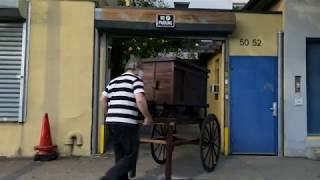